How Do People Really Feel About Amazon’s Big Announcement? Here’s What We Found Out.

In September 2017, Amazon released a public request for proposals from cities vying to become the location for its second headquarters — setting into motion over a year of events that have caused a range of emotions and responses.

By mid-October of that year, the company had received 238 bids. By January, the list of contenders had been narrowed to 20 finalists. And starting last week, rumors were swirling that Amazon had decided months ago that it would split its second quarters — commonly dubbed “HQ2” — among two cities.

Those cities, it was officially announced this week, are Crystal City, Virginia, and Long Island City, New York.

The response has been mixed. Some officials in both locations have lauded the selection.

“Welcome to Queens, #HQ2,” wrote New York City Mayor Bill de Blasio in a tweet — only to receive a range of replies, including “NOPE, NYC doesn’t want this.”

Someone needs to explain to NYC taxpayers why we’re being forced to subsidize the corporation led by the richest man in the world & pay to push out long-time Queens residents without any legislative process.

But in a sea of tweets, praise, and outrage, we wanted to know: How does the average internet user, perhaps representing those most likely to use Amazon, really feel about this announcement?

We had questions and set out to get as many answers as possible — so we ran a survey of over 2,500 people across the U.S., UK, and Canada. Here’s what we learned.

Many Are Unfamiliar With the Amazon HQ2 Journey

For every survey question we ran, between 20-50% of respondents indicated that the question was the first they had heard of HQ2 at all.

For instance, when we posed the question — “Earlier this week, Amazon announced that it would split its second headquarters — a.k.a., ‘HQ2,’ between two cities. Without looking it up, do you know which two cities were selected?” — a quarter of respondents indicated that weren’t familiar with HQ2.

Earlier this week, Amazon announced that it would split its second headquarters — a.k.a., “HQ2,” between two cities. Without looking it up, do you know which two cities were selected?

Otherwise, the highest number of respondents said they were aware of which two cities were selected, though the split among responses was fairly even.

We found similar results when asking respondents how surprised they were with the HQ2 city selections. Again, close to a quarter of respondents said they were previously unaware of the Amazon location saga.

“Earlier this week, Amazon announced that it would split its second headquarters — a.k.a., “HQ2,” between two cities. Did you find this news surprising?”

But out of those who were familiar with it, just under a third of respondents said that they were somewhat surprised by the news. Few people, it seemed, were caught completely off-guard by the cities selected for HQ2.

For respondents who were surprised, we wanted to know which cities they previously thought might be chosen as the new home for HQ2.

Earlier this week, Amazon announced that it would split its second headquarters — a.k.a., “HQ2,” between two cities. Prior to this announcement, which location were you expecting Amazon to select?

Adjusting for the percentage of respondents who said they were unfamiliar with HQ2 prior to seeing this question, we found that the highest number indicated they expected Toronto to be selected.

However, that could be due to the fact that a somewhat disproportionate number of respondents from Canada — nearly 40% — selected Toronto as their answer. 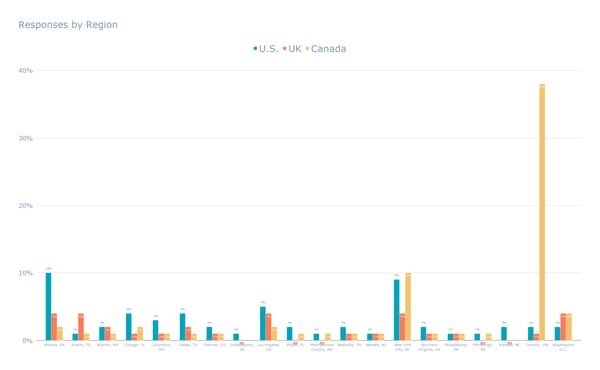 Otherwise, the second-highest number of respondents said they believed New York would be chosen, aligning with the general lack of surprise we saw among respondents in previous questions.

Finally, we wanted to measure how people feel about what type of impact HQ2 might have on the locations where it’s slated to be located.

First, we asked people to measure how positive or negative the overall impact of the presence of HQ2 in the cities selected could be.

Earlier this week, Amazon announced that it would split its second headquarters — a.k.a., “HQ2,” between two cities. Do you think that HQ2 will have a positive or negative impact on the locations selected?

In general, respondents indicate a positive outlook for the cities where Amazon’s HQ2 will be located, with about half answering that the impact will be beneficial in some way.

As for what the specifics of those impacts look like, we also asked respondents what sort of outcomes they expect to see as a result of Amazon moving into these locations.

Earlier this week, Amazon announced that it would split its second headquarters — a.k.a., “HQ2,” between two cities. What sort of impact, both positive and negative, do you think HQ2 will have on the locations selected?

Most respondents believe that job creation will be the highest (positive) impact area, with 49% indicating that they think the opening of HQ2 will create employment opportunities across a range of skill sets and career progress.

The Impact on the Marketing and SMB World

Amazon isn’t alone, however, in its wooing of east coast talent. Not long after the HQ2 locations were announced, Google CFO Ruth Porat said at a Wall Street Journal event that the search giant would double its workforce in New York City over the next decade.

It’s a move that prompts further questions — such as, “Why all the attention at the opposite end of the U.S. from Silicon Valley?”

“Not everybody—big surprise—wants to live in Silicon Valley,” Porat said at the time, “so we want to make sure we have the opportunity to build vibrant centers across the country.”

But ask HubSpot VP of Marketing Meghan Keaney Anderson, and you’ll learn that tech talent on the east coast isn’t a new concept.

“There is a rising tide factor here. The east coast was already a magnet for tech talent,” Keaney Anderson explains. “Amazon moving here further solidifies that and could bring more people into the region.”

So how does that bode for the small-to-midsize businesses (SMBs) in the areas where these tech giants will be growing, and the marketers often responsible for crafting their messages to this increasingly competitive talent pool?

Is it a positive development, in that there’s more talent to go around? Or will it become more challenging for SMBs to attract good talent when newly adjacent to Big Tech?

It all goes back to that messaging, Keaney Anderson says.

“If you’re in Amazon’s geographical shadow, you are going to need to put some thought into your culture and what you have to offer that is unique to talent,” she suggests. “Not everyone wants to work for a giant company, even a really interesting one like Amazon. You need to decide what your differentiation is, as an SMB, to offer recruits.”

HubSpot VP of Marketing Jon Dick agrees that SMBs should lean into that variation of talent.

“Having more jobs open, regardless of where they are, does create more competition. But that can be a good thing,” he explains. “Large tech companies and SMBs attract different people.”