“Unriddled” is HubSpot’s weekly digest of the tech headlines you need to know. We give you the top tech stories in a quick, scannable way and break it all down. It’s tech news: explained.

Unriddled: The Tech News You Need

Confirming rumors that began swirling last week, Amazon officially announced yesterday that its second headquarters — better known as HQ2 — will be split between two locations: Crystal City, VA (considered by some to be a neighborhood of Washington, D.C.) and Long Island City in the Queens neighborhood of New York.

The announcement comes as no surprise to those who were saying for months that Amazon was likely to select the Washington, D.C. area as an HQ2 location — such as NYU Stern professor Scott Galloway, who earlier this year pointed out the proximity of Crystal City to Amazon CEO Jeff Bezos’s home in the area, as well as his preexisting ownership of the Washington Post.

“As a former Governor, now Senator, but also as a former technology executive, I’m really excited about the potential Amazon offers not only to Northern Virginia,” Warner said in a statement, “but the whole capital region and the entire Commonwealth.”

2. An Unsend Feature Is Coming to Messenger

Facebook has confirmed, via an iOS app store description, that users will soon be able to “remove a message from a chat thread after it’s been sent.” 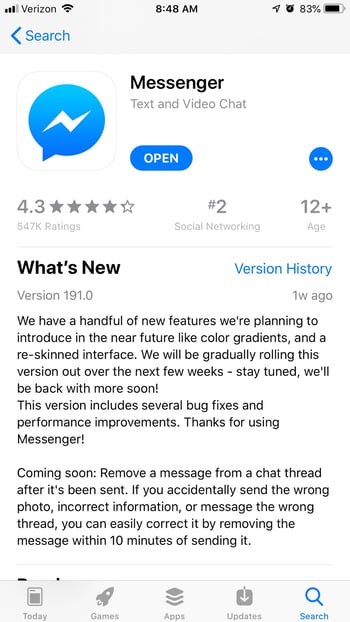 “If you accidentally send the wrong photo, incorrect information, or message the wrong thread,” the description reads, “you can easily correct it by removing the message within 10 minutes of sending it.”

This teaser of the new feature — which is said to be “coming soon” — arrives after months of speculation, and follows Facebook’s admittance that CEO Mark Zuckerberg had the option to delete messages after sending them. Read full story >>

After alerting users that their follower counts might drop in July, Twitter has once again said that, thanks to a bug, these previously “locked” followers reappeared and have once again been removed.

According to Reuters, the bug caused these accounts to be “briefly added back [to] follower accounts” for a “few accounts.”

Twitter itself lost about 7.8 million followers in the initial July purge, got 2.36 million of them back by October, and lost another 2.4 million on Friday. Read full story >>

4. Google’s AI Is Getting to Work

Earlier this week, it was announced that Google would open source its artificial intelligence that plays a vital role in distinguishing one human voice from another.

The formal term for this distinction, “speaker diarization,” describes the process of being able to tell different voices apart in audio where many people might be speaking at once. It’s “an important part of speech recognition systems,” the company says, playing a vital role in “solving the problem of ‘who spoke when’.”

According to VentureBeat, the newly open-sourced AI can tell voices apart in this situations with up to 92% accuracy. Read full story >>

Also in the world of Google AI, The New York Times is using the company’s technology to help make its archive of photos (which date back to the 1870s) “smarter” — that is, to help recognize and translate text that describe the photos.

In other words, writes Stephen Shankland of CNET, the NYT is using Google AI to “turn a historic archive of more than 5 million photos into digital data that’ll appear in the newspaper’s features about history.” Also a future possibility, Shankland writes, is exploring AI technology for object recognition in the photos. Read full story >>

Help Me Finish That Thought

Think of it as a visual-content autofill. Google announced this week that its AI technology will also be applied to Android devices to suggest GIF images, emoji, and stickers that it believes fit into your conversation.

Starting yesterday, Google said, phones using the Android operating system and the company’s Gboard will use machine learning to know which of these visuals that best fit the specific context of a conversation.

“With thousands of emoji and stickers, and an endless number of GIFs, it can sometimes take awhile to find the perfect way to say ‘I love you,’ ‘hooray,’ or anything else you’re trying to communicate,” writes Gboard Product Lead Angana Ghosh. “This makes it faster and easier to share your #feelings and your glowing personality with whoever you’re chatting with.” Read full story >>

Yes — there’s more Amazon news. Last week, it was revealed that Amazon reached an agreement with Apple to carry more of the latter’s products on its website, including the latest models of iPads, iPhones, and the Apple Watch. The product selection will not, however, include Apple’s HomePod smart speaker, perhaps due to its potential competition with Amazon’s own Echo smart speaker products.

But, there’s a catch. This new product expansion means that independent vendors selling refurbished Apple products on Amazon’s marketplace will now face high restrictions. Their listings, explains CNET‘s Ben Fox Rubin, will be removed after January 4 of next year, and they’ll “have to apply with Apple to become authorized resellers on Amazon.” Read full story >>

6. Marketers, Take Note: Samsung Is Going All-In on Voice and Now Is the Time to Prepare

At last week’s Samsung Developer Conference, the name of the game was connectivity — and voice assistant Bixby is what’s tying it all together. Here’s what marketers should know about it. Read full story >>

7. Meet the People Building the TV Controlled by Your Brain

Imagine a TV that’s controlled only by the brain. Meet the people developing that technology today — and discover the future they envision for it. Read full story >>

8. The Voice Search Barometer: Where Do Users Stand? [New Data]

Studies say that more and more online transactions are taking place via voice. But what do these transactions look like — and how many users are really adapting voice? Read full story >>

9. The What, Where, and How of Video Consumption [New Data]

With new online video products popping up with increased frequency, we wanted to know how people really prefer to watch. Read full story >>